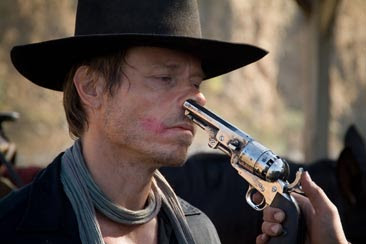 Work in the "real" world is keeping me away from the theaters this week so look out for a return to double-featuring next week. Just to tie you over (you millions of readers.. hi Dad...hi Mom...) here is a quick dispatch from last week's Polish Film Fest:

Aria Diva (Dir Agnieszka Smoczyska) 2007: Smoczyska is a student at the Andrzej Wajda school of filmaking and her short film is proof that she has learned well. Shorts are incredibly hard to do and often feel forced and studenty (or like sped up melodramatic low budget features), but Aria Diva starring the truly divaesque Katarzyna Figura as a famous Opera singer who has a fling with her housewife neighbor, does not need any excuses. I look forward to seeing Smoczyska's first feature.

Summer Love (dir Piotr Uklański) 2007: If you ever see this film and understand it, shoot me an email. The first "Polish Western" features Polish actors speaking in english (say "Lets cut him off at the pass" in a Polish accent.) Add to that a sex scene in which the couple spell out the word "sex" with their bodies on the floor Busby Berkeley Style and a scene where a man lights a pile of gunpowder on his head and you have Summer Love. I have the sneaking suspicion that the film is brilliant, but I really couldn't say why (I can't even explain the plot to you). But any film that features Val Kilmer as a corpse who gets tomatoes squished into his eyes must be brilliant.
Posted by Lixian at 11:32 AM