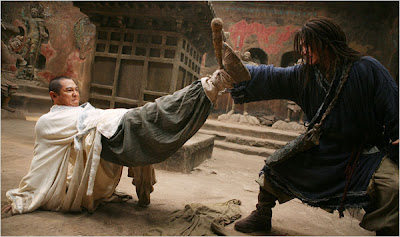 Yes, the pairing of Martial Arts powerhouses Jet Li and Jackie Chan is extremely gimmicky. And yet, as a kung fu movie fan, I have to admit that seeing the pair fight each other on screen was exhilarating and fulfilled a dream I did not realize I had. The Forbidden Kingdom features Chan as a drunken immortal, an homage to his earlier Drunken Master films, and Li as a fighting monk, a nod to his roots in the famous Once Upon a Time in China series (he even gets to exercise his substantial and underused comedic acting chops as he doubles as the character of the Monkey King). After enduring so many mediocre Li and Chan films in the past few years (Shanghai Knights, Cradle to the Grave... to name two) it is a relief to see director Rob Minkoff letting his two stars do what they do best. In essence, The Forbidden Kingdom sees the return of two great masters of the kung fu genre to their roots. The following video from the Spill.com (my new favorite film site) really sums it up:


However, as happy as I was to see this return to form, the film will probably bore anyone who does not still live with their parents. If Praying Mantice style vs. Tiger style does not intrigue you/ make you smile gleefully, go see Iron Man (which by the way is 15 dollars well spent [$10 for the movie $5 for the slushy]); for The Forbidden Kingdom is truly a film made for fans. Not only are the characters nods to themselves and the roles that made them, but the entire story is about a fan who saves the day for his heroes.

The film centers around Micheal Angarano, who plays a nerdy Boston Kung Fu fan who gets improbably transported into the world that he worships. The boy becomes man/kung fu master plot is predictable, but nevertheless warms your heart; for a fan is necessarily the little guy, the worshipper or groupie. And to see the little guy become what he has always dreamt of being is a plot that never gets old.

It is this idea of the fan as hero which led me to pair the film with Kill Bill Vol. 1. Quentin Tarantino is (despite what you may think of him), the film fan (cult film fan would perhaps be a better description) made good. And no film of his better shows off his fan-ness than Kill Bill Volume 1. In the first 30 seconds of the film alone you are treated to a Klingon Proverb and an homage to the Godard Film Band of Outsiders (blech!). Tarantino is the film junkie actually allowed behind the camera (for better or worse in some cases but I'll save that discussion for another time.) The casting of Gordon Lui (of 36 chambers fame) in the film is no coincidence. Wouldn't we all, if given the opportunity to work with our idols, take the chance? Tarantino is a man, similar to Angarano's character in The Forbidden Kingdom, who is allowed to play in the land he has worshiped. In this case the world of film. Viewed through this lens, Kill Bill Vol 1. does not dissapoint, there is black and white, split screen, anime, saturated color (subtitles even!!). There are few style stones left unturned.

That is not to say the film is a stylistic mess. Tarantino successfully pays homage without losing the film's individual identity, embodied by revenge minded Uma Thurman. Somehow all the quirky parts taken from other films blend together to become more than the sum of their parts. They become Tarantino style. Fan boy enters hero's world and becomes his own man. Lets hear it for the little guy!