That Awkward Moment: Notes on Ms. 45, The Act of Killing 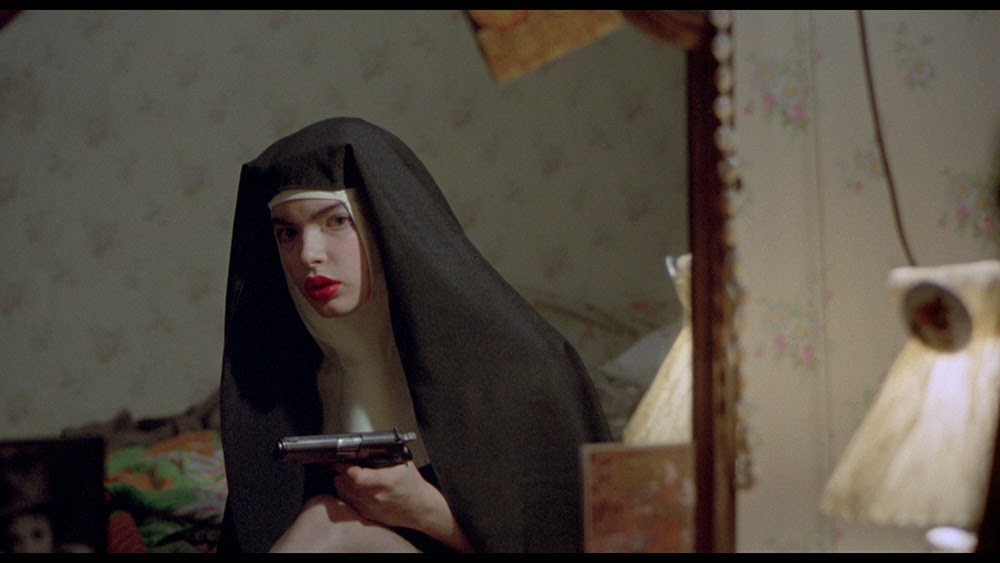 "Shame on you for laughing at a rape victim!"  This line is not heard in Ms. 45, NY cult director Abel (King of New York) Ferrara's second feature; it was spoken by a young woman in the front of the theater, chastising the very packed crowd at The Brooklyn Academy of Music screening of (God bless the) Alamo Drafthouse's new restoration last night during the end credits.  People were just finishing their ovation and were so jazzed up that many asked the woman to speak up and repeat herself above the din.  Once the statement was made clear, a strong murmur erupted, everyone starting to wonder if they'd all seen the same movie and/or reacted shamefully or inappropriately.
A tone is set for Ms. 45 from the get-go -- scene one introducing a buffoonish male boss at a garment factory as he shows off sherbet-colored, "only in the '80s" patterned wares to a client; scene two, the team of women who work for him filing out from work for the day, last being our mousy-haired, mute heroine Thana (a wonderfully observant performance by 17-year old Zoë Tamerlis Lund, resembling Anne Hathaway from certain angles and who later co-wrote Ferrara's infamous Bad Lieutenant) patted awkwardly on the head like a child.  These scenes are where most of the chuckles in the crowd began.
Not long after this introduction, she is made to withstand a harrowing assault in a requisite back alley, followed by another sexual assault in the very next scene in her broken-into apartment, which sets the rest of the film in motion.  Nobody laughed, and the shift in tone speaks to the mechanics of exploitation filmmaking.  Ferrara clearly took the time to distinguish between these catalytic scenes, the ones at the very beginning, and the rest of Ms. 45.  At no point are we made to feel insensitive to the terrible circumstances that befall Thana.  Ms. 45 does not lewdly linger over her traumatic event(s); rather, the exploitive elements are saved solely for the revenge plot of the movie.  The audience laughs with her, as she picks off one man after another at the first sign of offense or insult (the use of No Wave guitar & saxophone to cue her awakened wrath is period perfect).  The running gag of Thana having to parcel bags of "trash" out of her apartment throughout the movie is especially satisfying.  The "laugh at" moments seemed more to do with the cheesy '80s setting and the general over-the-top yet just-right piggish behavior of just about every man we see onscreen.  The basic irony and subversion of guys getting killed because "they were asking for it" probably garnered the most audible laughter among the crowds.
Yet was the statement made by the audience member wrong?  It's an interesting moral implication and gets at the heart of what revenge movies are meant to do -- create a fantasy that gets you rooting for the antihero beyond rational points of order and lawful reciprocity (it's telling that not a single cop shows up in the movie until the nosy landlady everyone-who's-ever-lived-in-an-apartment-building-knows calls them in towards the end).  Most citizens of society would immediately say they would not condone such behavior in the real world, and Ms. 45 (which also contains dashes of Psycho, Repulsion, Taxi Driver, Carrie, plus a notable upending of a famous shot from Manhattan, to name a few of the movies directly alluded to throughout) serves as a gold-standard for wish-fulfillment.  Unlike other movies with similar drives (especially from the '80s), where the heroine is either killed soon after her ordeal (Death Wish) or completely fades into the background for the rest of the movie (The Last House on the Left, Unforgiven) to make way for strong, vengeful men, Ms. 45 permits it's female victim to seek her own revenge, succeed, and be protected from any further violation by men.  She's not even judged for enjoying her role as angel of death.  It's a testament to the movie's ability to speak to a 2014 audience who seemed more shocked by the filth, garbage and fashions of 1981 than by the politics and reaction of female characters to the atmosphere of male violence implicit throughout the New York City of Ms. 45.  But maybe all this is irrelevant where the subject matter is concerned.  Spike Lee stated at the end of 2012 how he would not see Django Unchained because he felt applying a spaghetti western form to a slave narrative was offensive.  Slavery is slavery, rape is rape, and no amount of fantasy wish fulfillment will be able to make that OK for everyone. 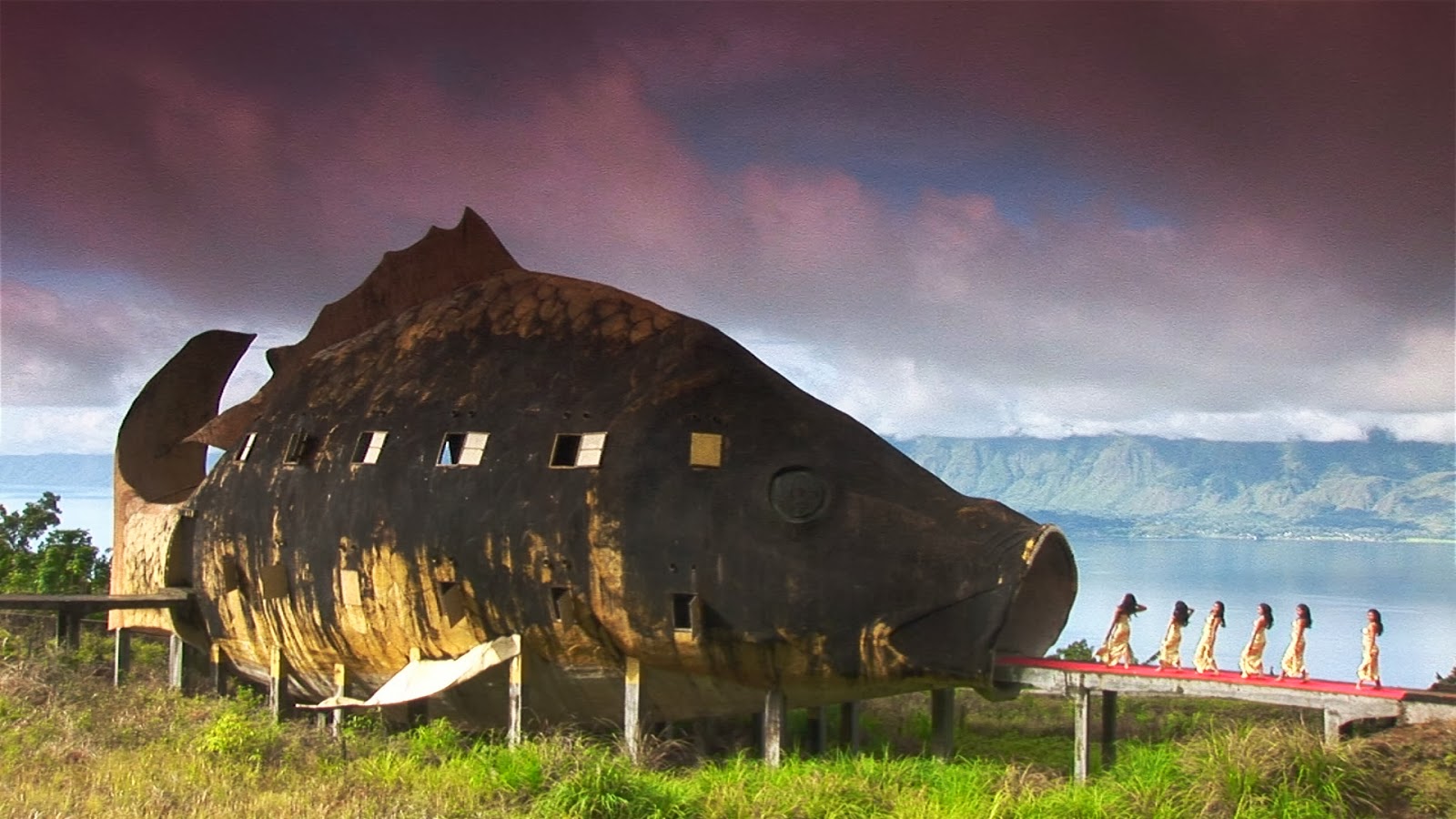 Last night's unique retort stayed with me and called to mind my favorite movie of 2013, The Act of Killing, a documentary (up for an Academy for Best Foreign this year and, coincidentally, another Drafthouse Film) which presents Indonesia almost as an alternate universe where the bad guys won and are treated as national heroes.  As the title implies, most of the movie is spent describing in detail the way hundreds of thousands of people were killed during the anti-communist purge in the mid '60s, told by the very individuals who performed the mass killings.  Our main "character", Anwar Congo, personally killed (by his own admission) as many as 1,000 of these people.  The movie does a magnificent job of mixing fantasy and reality, allowing the revered murderers to not only tell their own stories but be given the opportunity to revisit and playact them in their own films within the film.  It's sick, twisted, truly horrifying, and one of most surreally amazing movies I've ever seen.
But the most absurd part of the experience of watching this was the gentlemen sitting two seats next to me, who kept chuckling at scene after scene.  I was mortified -- did he not understand that what he was watching was a genuine documentary?  It took everything in my power not to slap this guy in the face and convince myself that this was the nervous reaction of someone not prepared to believe what was happening on screen (and/or maybe he was on the most ill-advised first date ever).  It made me think way back to seeing The Celebration with a friend, my first and, shamefully, last seen film that was part of the official Dogme '95 movement.  During the famous scene (spoilers, I guess) where a son, established in earlier scenes to have been working up the nerve to this moment, exhorts the guest of honor by speaking of his father raping his sister, my friend erupted in laughter.  I was embarrassed -- how could someone laugh at such a statement?  Again, the absurdity of the moment took control, and I understood that it was a reaction to discomfort, much like the way people laugh at jump-out-of-your-seat moments in horror movies.  I loved Ms. 45, but some horrors are not so comfortably consumed. 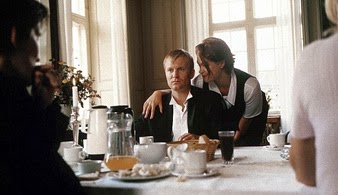 Ms. 45 is playing at BAM through Sunday, Feb. 9.  The Act of Killing can be seen on Google Play or YouTube.  The Celebration (Festen) is widely available online.
Posted by Kenneth at 2:47 PM No comments: 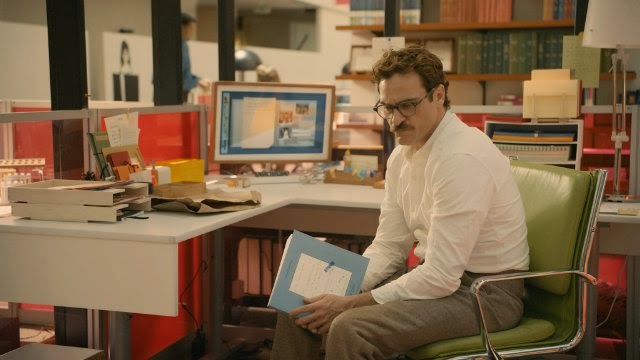