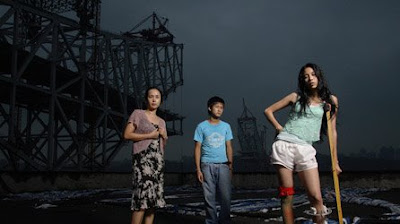 Zhang Yibai's "Lost. Indulgence" and Michelangelo Antonioni's "Il Deserto Rosso" (the Red desert) is not an obvious pairing. I was very tempted to pair "Lost. Indulgence" with the recent Jia Zhang Ke film "Still Life" (which was one of my top five movies of last year). Both "Still Life" and "Lost Indulgence" are films made in China seemingly with the blessing of the Chinese Government. But unlike the slew of recent Chinese government sponsored films that star the entire Peoples Liberation Army in period garb fighting in slow motion to unify and glorify China, these films are quiet and often devastating looks at the lives of ordinary Chinese people.

I find it surprising that both these films seem to have made it easily through the notorious Chinese censors. Through these two films we see a China that allows women to be placed into servitude to pay off debts, veterinarian clinics in which workers pay for each death of an animal and the staggering bulldozing pace of change in China.

"Lost. Indulgence" takes place in an factory town, and follows the lives of a family after the father, a taxi driver, drives his cab into the Yangtse river. The mystery surrounding his death and the role that a prostitute, who was riding in the car and who is taken in by the family, had in his death, drive the drama of the entire film. Like in "Still Life" and indeed in real life, do not expect any of the mystery to clear or for characters to rise above their situations. If there is any lesson to be gleaned from these two excellent Chinese films it is that life goes on. Still life is right.

So why then choose another film entirely to pair with "Lost. Indulgence?" Why "Il Deserto Rosso?" Antonioni's "Il Deserto Rosso" is a film about the industrial landscape and its effect on those who reside in it. Antonioni waited to make his first color film and "Il Dessert Rosso is the fruit of that patience. Every color is meticulously chosen: Sulphur yellows pour out of factories, banisters are bright blue. In Antonioni's film the landscape is very much a character, if anything it is the villain, poisoning the landscape and the mind of Monica Vitti (the film would make a great pairing with Todd Haynes' "Safe" in which the environment is the omnipresent villain).


In "Lost. Indulgence" the industrial complex is less of character and more of a stifling backdrop. It is this world that all the characters live in and yet seek to leave. The industrial city allows them to survive (the mother works in the factory and met the father there) but the son seeks a simpler, more idyllic, life. So while the landscape is not overtly a villain it is something to escape from nonetheless. Both films seek to come to terms with changing landscapes. Both films examine the effect of the industrialization of a landscape on ordinary people and their attempts to fit themselves into these quickly changing worlds. The son in "Lost. Indulgence" creates a miniature plaster reproduction of the entire city. He stares at it, trying to take in the entirety of his world and landscape. This vignette mirrors the audience's experience of watching the film: as much as these two films are studies of characters, they are also studies of worlds.

Other films in brief:

Idiots and Angels: George Plympton. I am not really sure that Plympton's work is able to carry a feature length format. Then again it was late, I was tired. I much preferred his short "Guard Dog."

Guest of Cindy Sherman: Paul H-O & Tom Donahue. This is a film made by and about the ex boyfriend of artist Cindy Sherman who found himself completely overshadowed by her and decided to make a film about it. The sad thing was, after the film was over, I wanted to go out and see more Cindy Sherman, and still could not come up with any reason why I should care about her ex-boyfriend.
Posted by Lixian at 1:27 PM