There will be blood.

Notes on the new CARRIE, TROUBLE EVERY DAY. 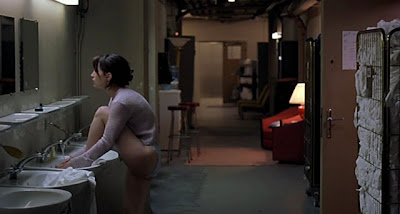 [Spoilers.]  I wasn't especially excited for a remake of CARRIE, a movie which is easily one of my top five favorite Brian De Palma movies of all time, but I was intrigued when I found out it was to be directed by Kimberly Peirce.  I ultimately had not loved BOYS DON'T CRY (for much the same reasons I didn't enjoy PHILADELPHIA the first time I saw it -- too "importantly" preachy and compromised), but I'd found it a very strong debut for a first-timer.  Only the third feature Ms. Peirce has made in 14 years, I thought of another director just as prolific and got even more interested.  [I'm gonna stop right here and mention this other director -- Jonathan Glazer -- because have you seen the teaser for his new movie?  You should see it now.  I'm not even sure when this comes out, but it must be amazing, right?  How can it not be?  If it's not as good as I'm hoping, I may have to stop watching movies.  Maybe.  Sorry for the digression.]  The new remake of CARRIE hews closer to De Palma's vision than the source material of Stephen King's, apart from one scene towards the end where a formal hearing is conducted regarding the events of the prom-night conflagration, alluding to the narrative structure of the original novel.  While Peirce is to be commended for trying out new things in this version, particularly in conceiving a story in which we have much more sympathy for Carrie White than with the townspeople in prior tellings, remaining so close to De Palma's take may leave you missing the bits he did so well the first time.
What Peirce does get right and in some cases improves on deserve noting:  A better sense of Margaret White's (Julianne Moore, just a tad heavy-handed) mental illness (nice, albeit excessive touch having her be a cutter) instead of simply being a Bible-wielding nutbar; the mercy shown to Ms. Desjardin (Judy Greer), despite her fruitless efforts at being a surrogate mother for Carrie White (Chloë Grace Moretz, playing the role with more self-protective suspicion than Sissy Spacek's gawky, guileless weirdo); and a greater emphasis on the tragic weight of Carrie's circumstances -- urgently, clandestinely learning all she can about TK and magic, she comes off as a stray mutant sadly undiscovered by the school-as-sanctuary of the X-MEN stories, or a Harry Potter that took a wrong turn for the worse adult guardian.  Speaking of which, there are definite "origin story" elements that dovetail appropriately with this century's glut of superhero narratives (possibly owing to co-writer Roberto Aguirre-Sacasa, a notable major comic book writer), but those remain subtle as the horror beats accumulate throughout the rest of the picture.  There are wisps of commentary on the proliferating arsenal of instant bullying methods via social media, along with echoes of class and self-worth a la THE BLING RING, but seem quickly abandoned for overstating Sue Snell's (Gabriella Wilde) guilt over the opening group assault on Carrie's unfortunate public discovery of her womanhood (there's even a late-story reveal of a blessed event, almost completely and awkwardly unnecessary to the story).  You also see this in the dimension given to Chris' (Portia Doubleday) bad-little-rich-girl character (with an uncredited Hart Bochner as her dad), further evidence of the director and writers' attempts at giving every character just a little more depth and motive.
It may help not being overfamiliar with the screen's original version; one can't help keeping a running tab of all the scenic snapshots this version stops to take note of and reminisce over how they've been done better (many of the sardonic notes of the original are thrown over for standard, hamhanded horror ones; the moments of pure ecstasy many of the characters experience just before death, sadly excised for overburdened demises; the wonderful shock of the ending of the original (though probably best left untouched); John Travolta).  You may say this is endemic of remakes in general until you stop to consider at least two this century which managed to transcend their predecessors -- both VANILLA SKY (derived from Spain's ABRE LOS OJOS) and LET ME IN (from Sweden's LÅT DEN RÄTTE KOMMA IN) took approaches that, despite other flaws they may have, made me forget (almost) all about their prior and at least equally brilliant incarnations (the latter was also based on a sprawling, multi-perspective novel).  Both also managed to tell thoughtful, personal versions of same and additionally placed them in a unique, American context, a telling contrast to a CARRIE remake that plays merely as horror movie of the month.  Perhaps doing an American remake of an American classic is ill-advised (yes, I'm definitely thinking of THE BAD NEWS BEARS).

After the disappointing returns of CARRIE, it was just a hop, skip, and a jump from Kaufman-Astoria to the Museum of the Moving Image (ain't Queens magic?) for the brand new 35mm print of TROUBLE EVERY DAY.  I remember originally looking for this at Mondo Kim's in the East Village years ago and finding their copy with one of their classic, written-on messages in the margins of the box:  "Not that it matters, but this copy has no English subtitles!"  Indeed, much of the movie's dialogue is kept at a minimum, and much of what's said in Claire Denis' cult classic is spoken in English by the film's protagonist, Shane Brown (Vincent Gallo, with his usual eerie, "I haven't slept in days" presence), or heard briefly in the lyrics of the soundtrack, provided by Tindersticks (a regular collaborator of Ms. Denis).  Many of Claire Denis' movies have focused on human desire, and TROUBLE EVERY DAY is no exception.  What sets it apart from the rest of her work is the full dive into a sci-fi/horror genre presentation (my apologies to the director, for I know she's taken pains to avoid this too-obvious association), where bloodletting very literally becomes the organizing priniciple of the main characters -- Coré Samuels, as played by a dialogue-free Beatrice Dalle, and the aforementioned Mr. Gallo, on honeymoon in Paris with his new bride June (Tricia Vessey) and in search of the former for reasons kept satisfyingly mysterious (insert DRACULA allusion here).  With the lack of dialogue, the human sounds you hear most are sighs -- arguably the most universal sound of ache and longing, heard here when characters are at rest, exhausted from sexual intercourse, or tired simply from some existential malaise (how very French).  All consuming need, lust, desire, and what in modern parlance has come to be referred to as sex addiction all come to the fore in TROUBLE EVERY DAY, as it forays into a not-quite vampire/cannibals story.  Shane and Coré's inevitable reunion (they are familiar with each other in 16mm flashbacks) is also offset by a subplot concerning Coré's doctor husband (Alex Descas), searching desperately for a cure to his wife's "affliction".  Shot in the usual, beautiful low-lit style of Denis' regular DP Agnes Godard, there are images of the Seine at dawn/dusk, wonderfully imagined shots in and out of an airplane as it flys over Denver (!), surreptitious views of a recurring chambermaid (Florence Loiret-Caille) washing her legs at a sink after a day's work, and blood, so much blood everywhere.  After this and CARRIE, one may become queasy over the slightest sight of anything red and wet for some time.
Posted by Kenneth at 2:16 PM

Labels: Let the Right one In