"The Clone Returns Home" and "Solaris" 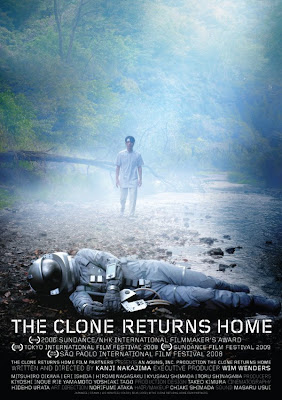 Among the year's most widely ridiculed statements in the cinema world, Lars von Trier's dedication to Andrei Tarkovsky before the end credits of Antichrist ranks right up there at the very top. Having seen von Trier's film myself, I wouldn't go so far as to say that it's a prank on the part of the Danish provocateur, although, at the same time, I'm also not quite sure that Tarkovsky would welcome such an irrelevant mention.

In the November issue of Sight & Sound, editor Nick James, when discussing the tastes and selections of film festivals worldwide, observes that many of the prominent filmmakers of today - from Bela Tarr to Bruno Dumont and Apichatpong Weerasethakul - are "all unified by a post-Tarkovskian idea of poetic cinema", and "the reverence with which much of this cinema is regarded is ... too often uncritical".

I don't know. If James' statement is accurate, a film like The Clone Returns Home, written and directed by Japanese filmmaker Kanji Nakajima, would most certainly deserve a bigger audience than it has so far. By juxtaposing a sci-fi premise (cloning, space mission) with highly philosophical musing on such ideas as memories, family, identity, death, and the nature of the human soul, the film looks like something that you might get if Solaris and Stalker were ever rolled into one. (There's even a bit of indoor water-dripping!)

The wife of The Clone's astronaut protagonist is faced with a similar moral dilemma encountered by Solaris' protagonist. Her husband has volunteered for an experimental cloning program that will 'regenerate' his body and memory after any accidental death during his missions. When it actually happens, the scientists meet with her to relate the plan, opening by stating that they're not there to offer condolescence. The wife is, rightly, furious with the offer - you don't replace your beloved partner with a clone; although, when she's countered with the matter-of-fact reply, "In that case, we'll have to offer you our condolescence", her resistence crumbles.

All in all, yes, Nakajima's film is almost as boring as Tarkovsky's (excuse me). But then again, anyone who's willing to last the 110-minute distance will be justly rewarded with a highly cerebral, and strangely touching, journey into the afterlife.
Posted by Edmund at 10:00 AM