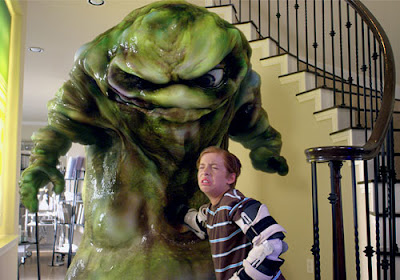 Leave it to me to post this AFTER the film is leaving the theaters. But lets face it, you weren’t going to go to the theater to watch Robert Rodriguez’s new kids film Shorts anyway. But maybe once you read this you will put it on your Netflix queue.

I was actually having a hard time coming up with a double feature for Shorts. I didn’t feel like it was fair to pair the film with anything that Rodriguez has done in the past, though I feel like seeing Shorts and Spy Kids 2 (well, anything with Spy Kids 2 really) is a good idea. Then on the subway, I was catching up on my backlog of Wired magazines and I read an article on “good enough” tech (The Good Enough Revolution: Why Cheap and Simple are Just Fine). And it occurred to me that this article, though discussing technology (cameras, military planes etc) actually articulated much of what draws me to Rodriguez’s children’s films.

The main gist of the article, which I highly recommend you read is that sometimes the simpler and more rudimentary the technology the better. For example the original Flip camera did not shoot in HD, or even have a optical zoom. And yet it was good enough. It was easy to use and it got the job done, whether that be recording rants to upload to Youtube or recording quick memories from vacations.

Rodriguez’s kids films are likewise “good enough”. Now, I love WALL-E and the rest of the Pixar clan, whose animation is outright beautiful, but when did high tech, special effects become a necessity of “good” childrens films? Kids are creative, more so than adults, they fill in blanks. Anyone who has ever seen a child’s drawing of their house (squiggles), knows that Kids are capable of using their imaginations to smooth over differences between what is represented and what is on paper. Rodriguez realizes this and thus the stories and jokes focus on being fun rather than being snazzy.

Rodriguez makes his kids films on the cheap (if you can get your hands on the special features of the Spy Kids 2 DVD, I will lend it to you! There is a great little snippet on how he creatively saves on production costs). He does not strive for realism or hyper realism (dazzle). He tells stories and jokes that kids get (like a giant booger that turns into a monster and terrorizes the home of the Noseworthy family - see pic above ew). He has fun with his films. And I would venture to say that his films, in being “good enough” are actually better. The plot, the “fun” does not get lost amidst all the add-ons. His films are the equivalent of really good traditional 2D animation. Hi Spongebob!

So that being said, I thoroughly enjoyed Shorts. As I write this I am still humming the theme music for the wonderfully named character of Helvetica Black. A theme that Rodriguez wrote himself I might add. The loose story centers around a magic wishing rock that wreaks havoc among a small suburban community and it is told in a series of shorts because the storyteller, young Toe Thompson, can’t remember the order in which events happened (eat your heart out Memento). John Cryer and Leslie Mann are hilarious as Toe’s parents, who are competing against each other at work.