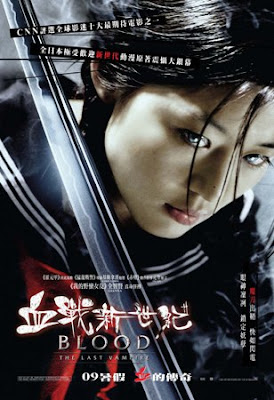 Just back from a preview screening of the live-action adaption of Hiroyuki Kitakubo's intriguing but over-brief animation from 2000. (The original was intriguing not only because the signature costume of its heroine stems from a joke, but also from its dubious racial, political and religious undertone.) While Gianna does look exceptionally hot here as Saya the non-smiling demon slayer (who also happens to be a vampire - don't ask), I'm sad to report that this film makes even less sense than the original despite doubling its runtime.

Let me put it this way: the parts based on the anime are mostly pretty awesome, but the back story that the filmmakers supplied to Saya is embarrassingly cliched AND non-sensical. Casting Allison Miller as Saya's sidekick is a misstep into teenage drama territory (although I can see the reasons they replace the ordinary-looking schoolteacher character in the original), while Koyuki's involvement as Saya's nemesis - without elaborating further, because of how incredibly ridiculous the final twist is - is nothing short of a joke.

So if you like the original and wish that it was longer... well, stop wishing and just stick with it.

(This is meant more as the ranting of a disappointed fanboy, rather than a proper review...)

Finally, a fact that's probably funnier than the film itself: in Hong Kong, Blood: The Last Vampire is scheduled for a June 4 theatrical release, i.e. on the 20th anniversary of the Tiananmen Massacre, under the Chinese title of "血戰新世紀". Talk about irony.
Posted by Edmund at 10:11 AM

yea i actually just saw this movie this afternoon. I was gonna go see terminator salvation but that movie got terrible reviews so i figured i'd go see 'blood' instead. I never saw the anime but i know of it. To make a long story short, the movie sucked. I liked the fight scene with the old guy but other than that the cgi looked like it was from a videogame and the other fightscenes were so close to the action that you literally couldn't see or tell what was going on. The twist at the end was extremely predictable, not to mention that it was hard to understand what the main demon was saying because english isn't her native language. Also, the biggest annoyance to me was the fact that it never explained how she is a vampire.
-----POSSIBLE SPOILER-------
Did her dad end up having sex with the main demon or something? I dunno, the movie sucked.

Truth is, Blood's reviews are as bad as Terminator's...

In the original animation (which hasn't supplied a background story to Saya), it's suggested that Saya is the last to have pure blood of her kind, thus the title.

In the movie, she's said to be the daughter of a human father and the head female demon, and is thus a half-human, half-demon. In other words, the movie may well have contradicted with the original story (and its title!).